Last day I received from a blog based in Arizona, 4Chion Lifestyle, a review about the movie Allegoria, screened at the last La Jolla Festival.

After I read  the kind words that the blogger wrote about the styling, I was inspired to share some parts of the writing process in terms of visual communication.

I started the production of the styling by tackling the script created by Ines Von Bonhorst and Yuri Pirondi: “Allegoria is loosely based on the myth of Plato’s cave, the allegory explores the relationship between the man and his space, questioning what is real and what is appearance instead. The main character of the film symbolically acts the role of a person suffering from a kind of agoraphobia, not as a disease but as a social aversion against what lies outside her world. For this character, we were inspired to the contemporary figures of Japanese Hikikomori.

Hikikomori can be considered a voluntary social exclusion by the Japanese youth, as a form of rebellion against the traditional social apparatus culture. The hikikomoris live imprisoned in their home or in their room without any contact with the outside or with family members or with friends. We imagined the role of a girl, that after long time isolated from the rest of the world, her persona creates an alter ego through the emotions. This antagonist is a sort of mirror, she’s a kind of doppelganger image who acts as her guide along the tortuous path of her memories.

We would like to use only a voice over (apart from few dubbed words), portraying the characters in order to create a stream of consciousness, as everything that happened in the movie are in the protagonist’s head. Regarding the text we were inspired by James Joyce’s Ulysses.
From a visual perspective, the direction of the photography will attempt to portray the most beautiful places at the Pompeano Castle”

According to that and to some sketches received from the directors, I created a mind map: 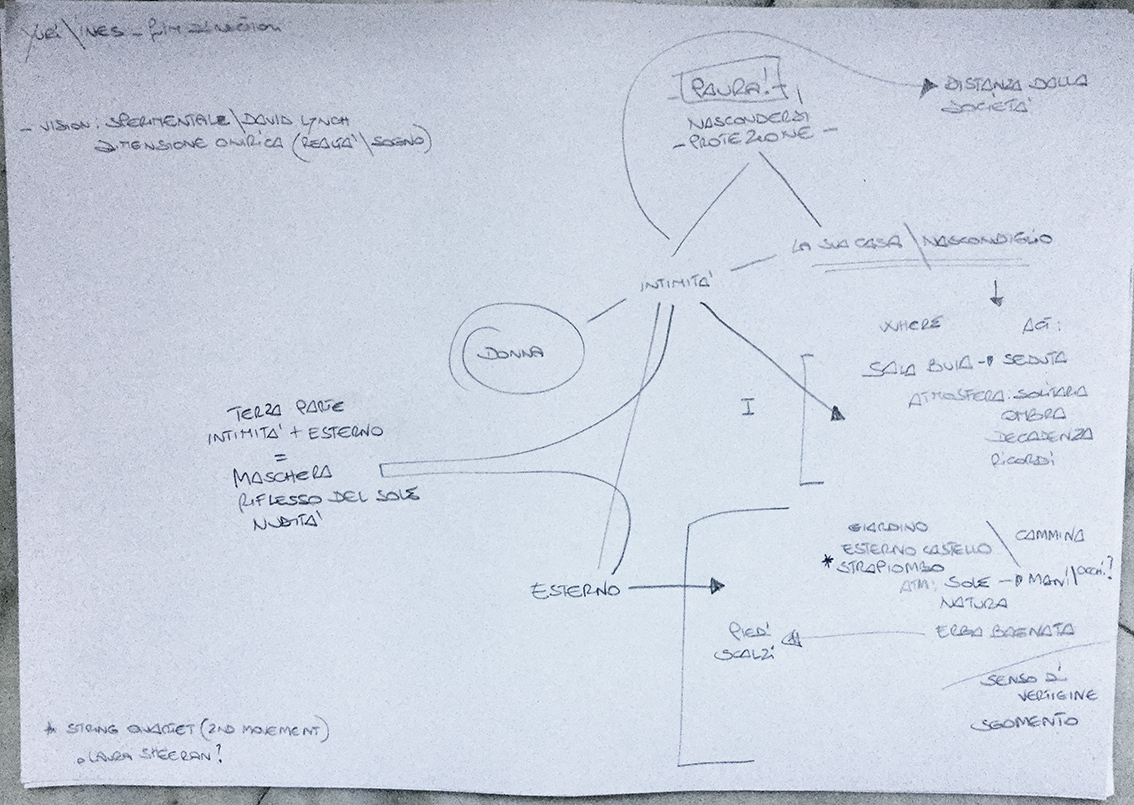 That allowed me to mentally layout the movie and to source styling clothes and accessories in a more visionary way.

For the first scene, when it was required to see our main character sitting in a bare, dark room and  one glimmer of light illuminates her back and creates a silhouette projected on the wall, I started to do a research of images that can visualize the atmosphere and I imagined that the shadow can projects some wings, to portray the desire to escape from her own body, to fly away. Then, going through Ikonostas Collections I chose the Butterfly Kimono for its sleeves, portraying the wings of a butterfly, in the lighter version, an ivory silk gauze to emphasize the fragility of our protagonist.  At the same time I wanted to show the sensuality of a female body that appears extremely seductive when we can perceive that is shuddering because of a hidden feeling. The kimono, that has a construction based on the Korean traditional clothes, shows, at this purpose, the shoulders.  The exaggerated lenght of the tulle skirt fill the space and marks a light gravity of the human body to the earth. 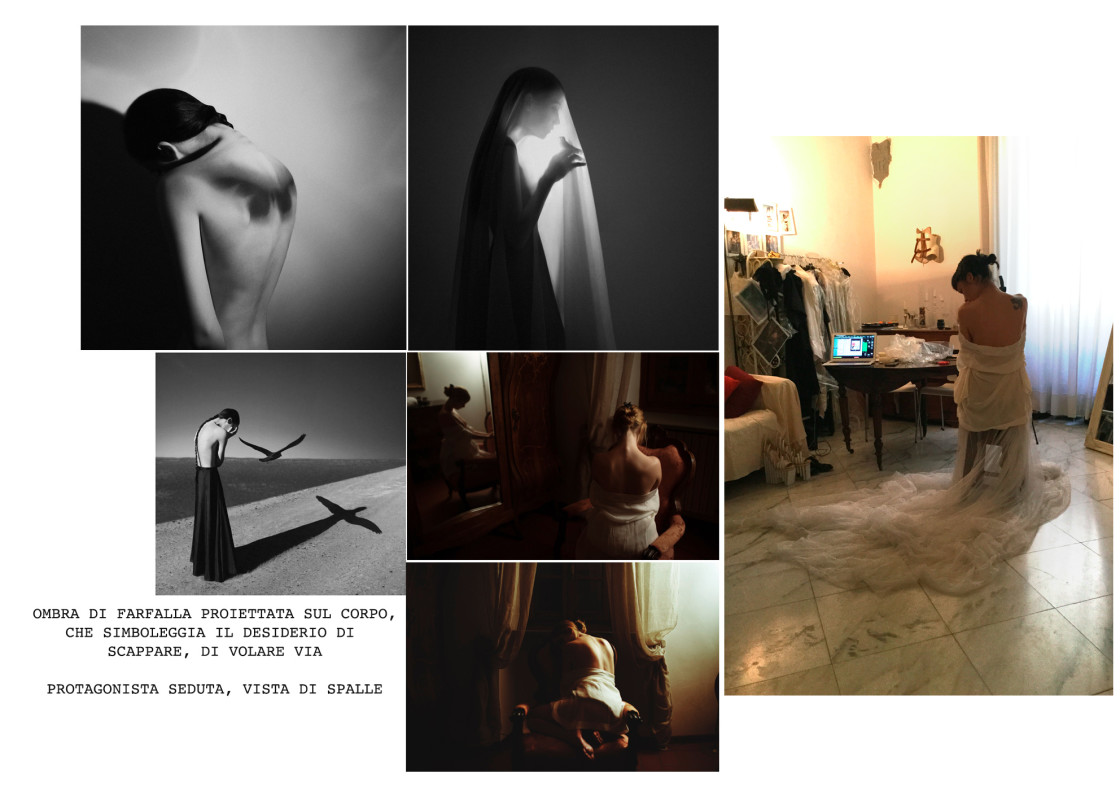 (mood board for the first scene and test in my studio) 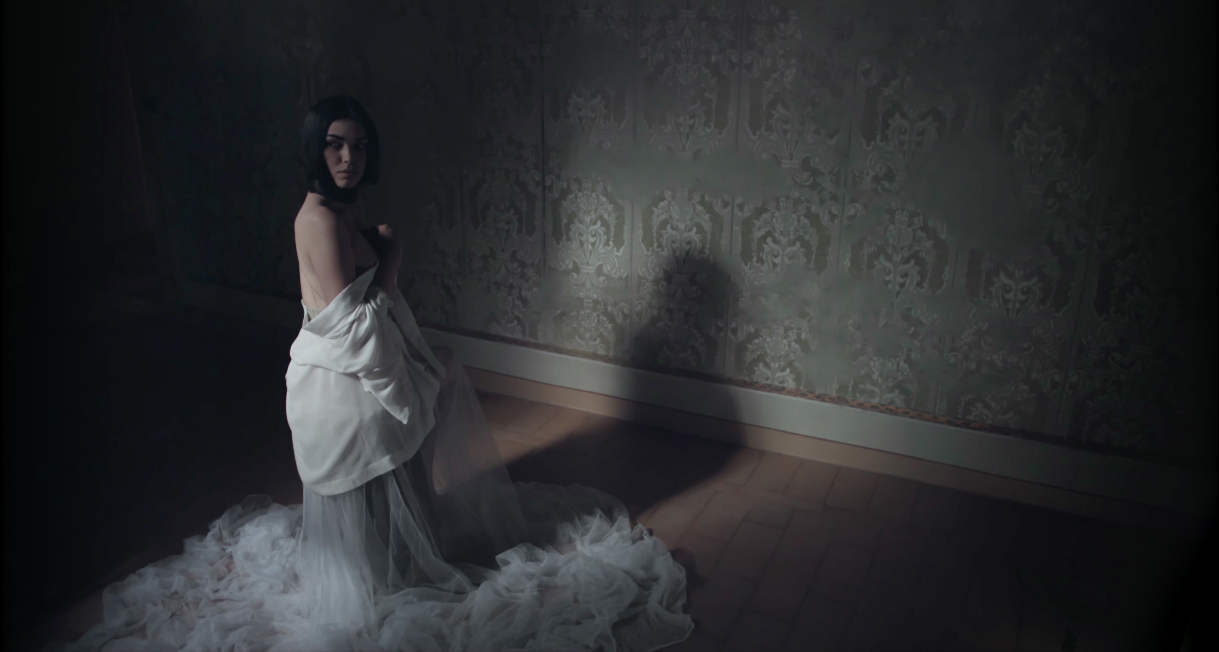 (screen shot from the movie)

In the following scene we see the protagonist walking in front of the ruined building, she’s looking around, the soundtrack becomes more present.

A: “Do you remember the feeling of the wet grass under your feet?” 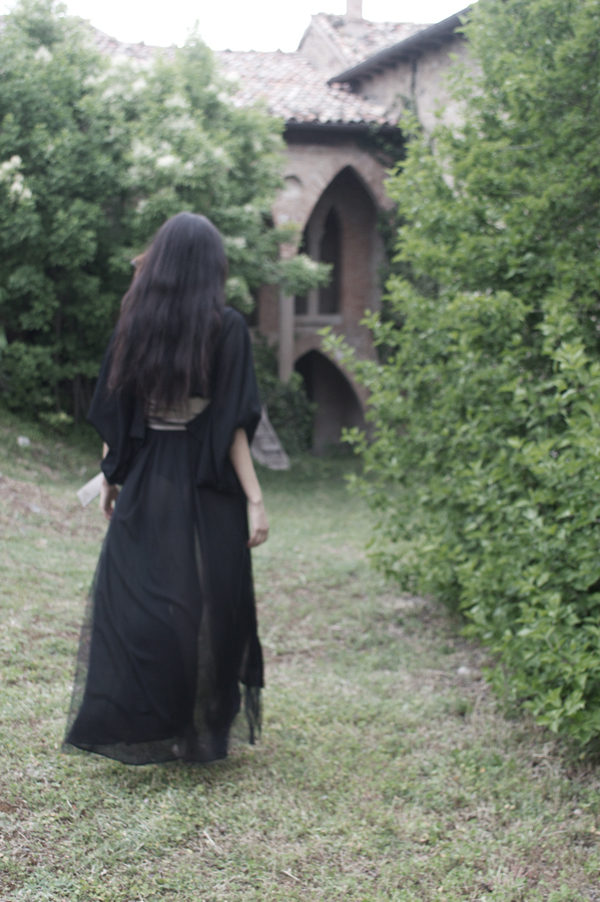 Let’s get back inside, where the atmosphere and the light changed.

We’ll see here a close up  on the face of the protagonist that is covered with a mask. Initially I imagined the mask appearing at the end, when she goes out of the castle, here below the first mood board. 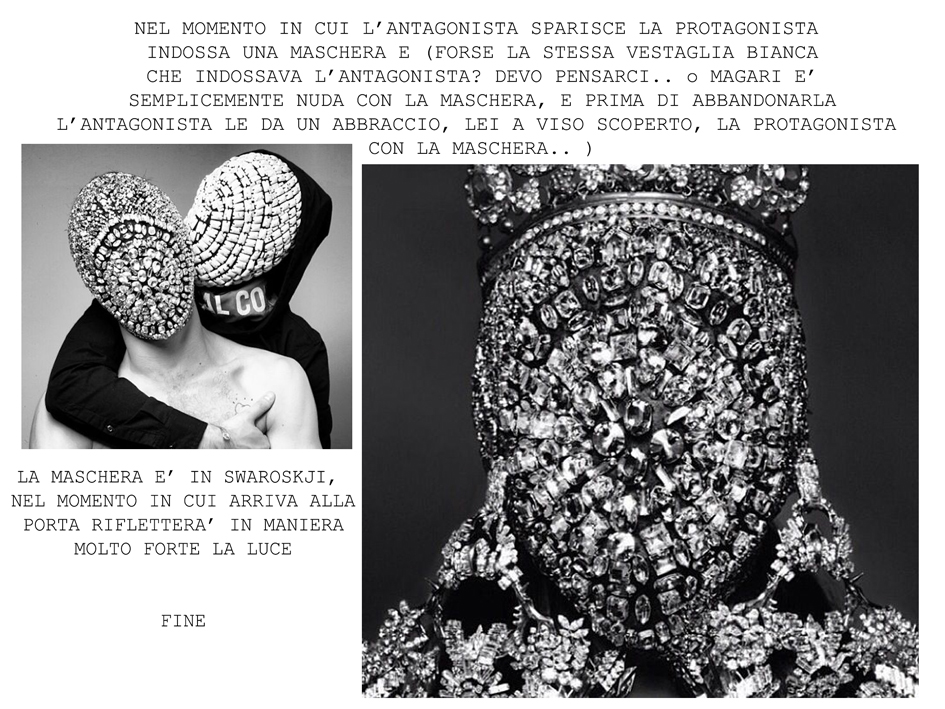 Then we decided to show the mask inside and I looked for some gold colors to fit better the suffused lighting. I selected at this purpose some jewels by VITTORIO CECCOLI with floral motifs. 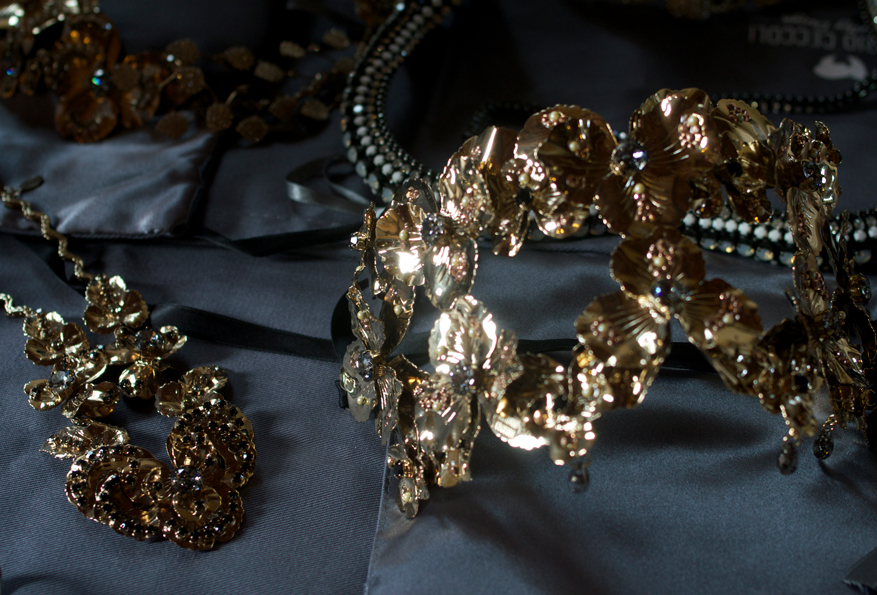 And I assembled them together to cover the face.

Wide shot of the room where we finally see her doppelganger (the antagonist) sitting on a chair looking at the protagonist.

We’ll see the image of the protagonist who is sitting under a table.

To create this styling I started to think to use the same style for the two characters, the Silk Satin Long Butterfly Kimono but in opposite colors, black and white, as shown in the following slide: 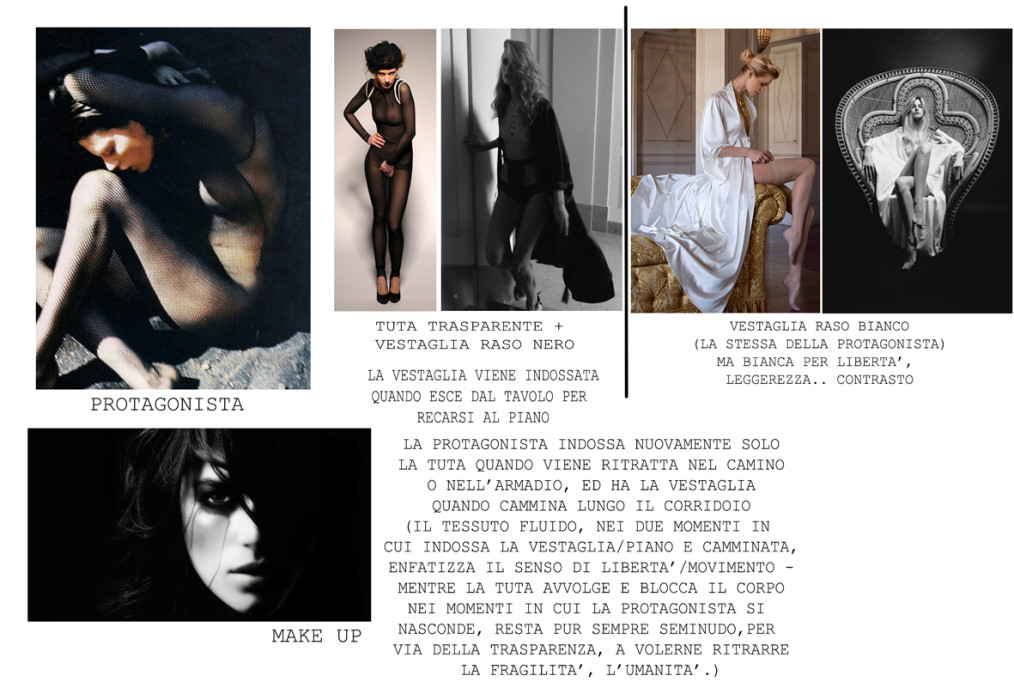 Then, thinking at the request of the directors to show the protagonist under the table, I proposed to add a major pathos to this scene, showing the protagonist crawling on the floor to get to that table where she would have hidden.

I tried several ways … to imagine the scene. I need a train … 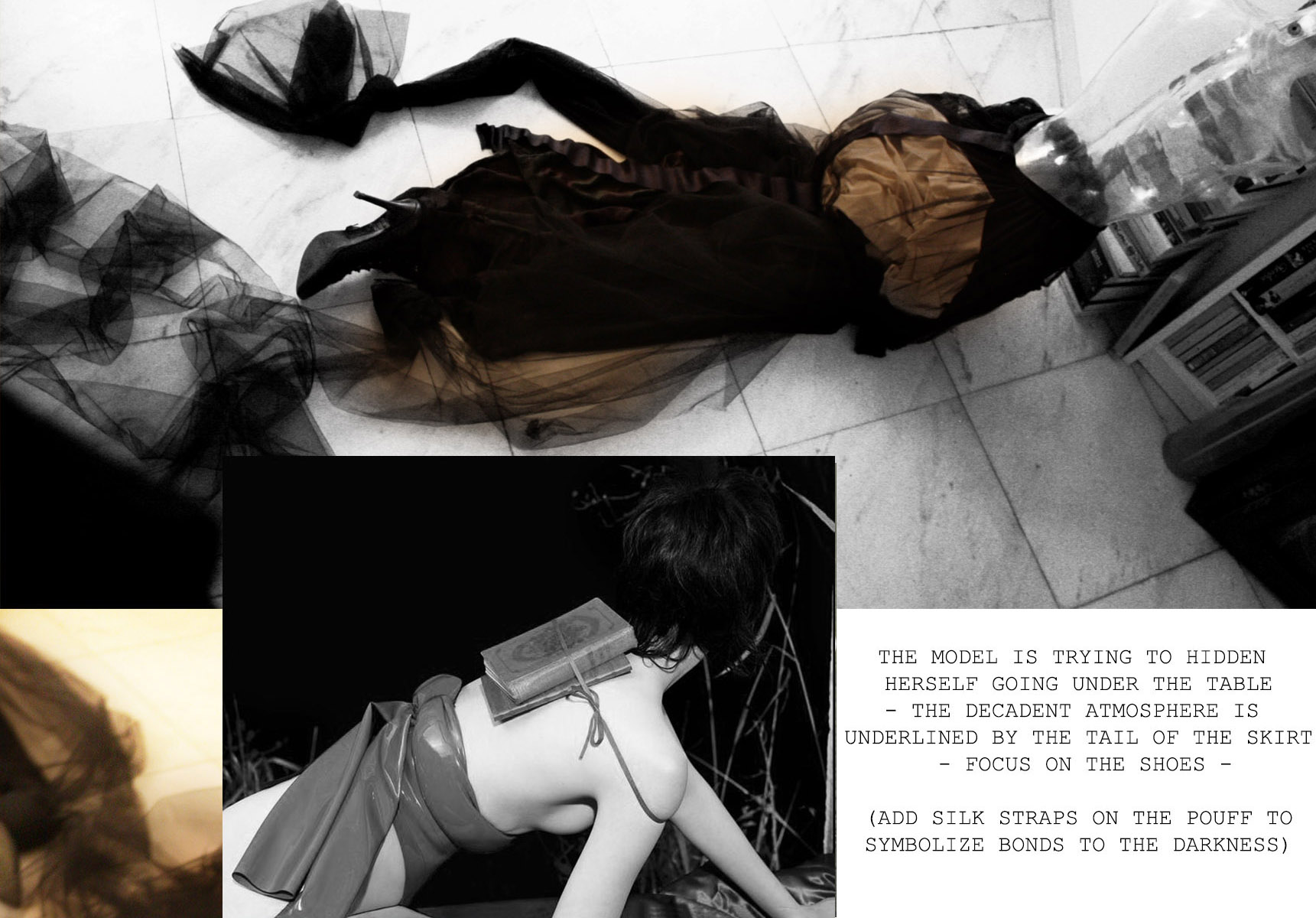 and a pair of shoes that have to be performative, adding decadence and showing a feeling of devotion to the material things of our life and an escapism from our fear of freedom.

I looked through the Internet two days to find the right shoes before to discover an incredible designer, her name is CAROLIN NINI HOLZHUBER.

I selected from her two pairs of shoes, one for the protagonist, made with leather, suede and copper. The two sides of the shoes are asymmetric and one of the heel can be fitted inside the opposite one.

I had to try by myself what I can do wearing them (plastic wraps are here just because my size is different).

I found these shoes so ethereal, in a way, that I matched with them a transparent iridescent dress that became the connection between the two characters, the second skirt under their kimonos. 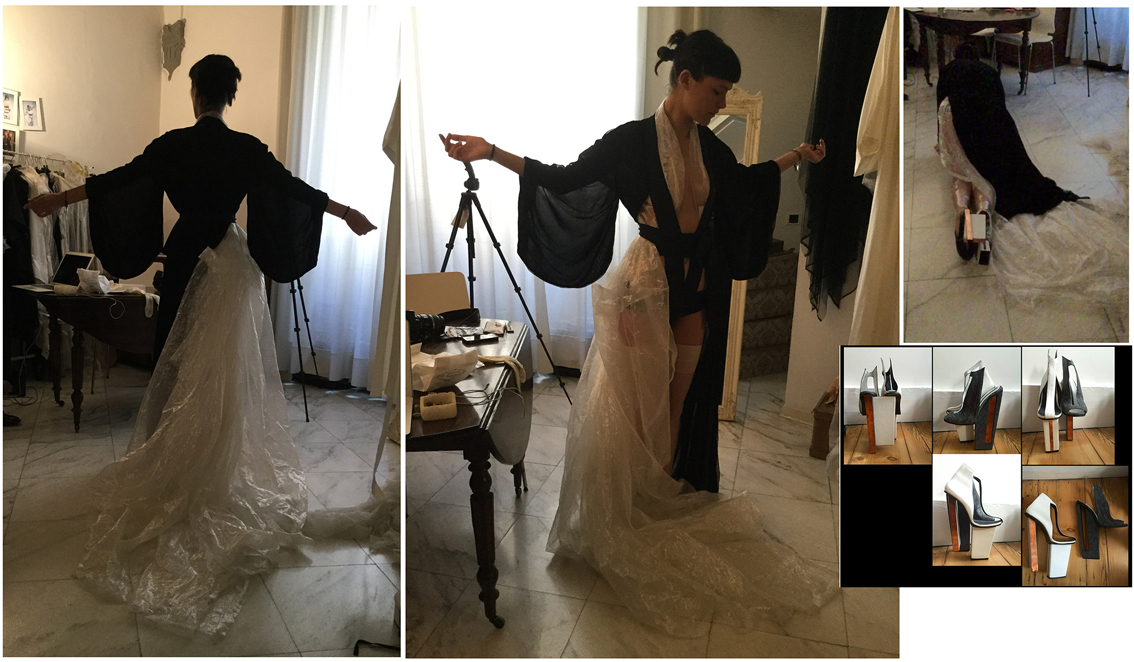 Here below some stills from the movie

The other pair of shoes was worn by the antagonist 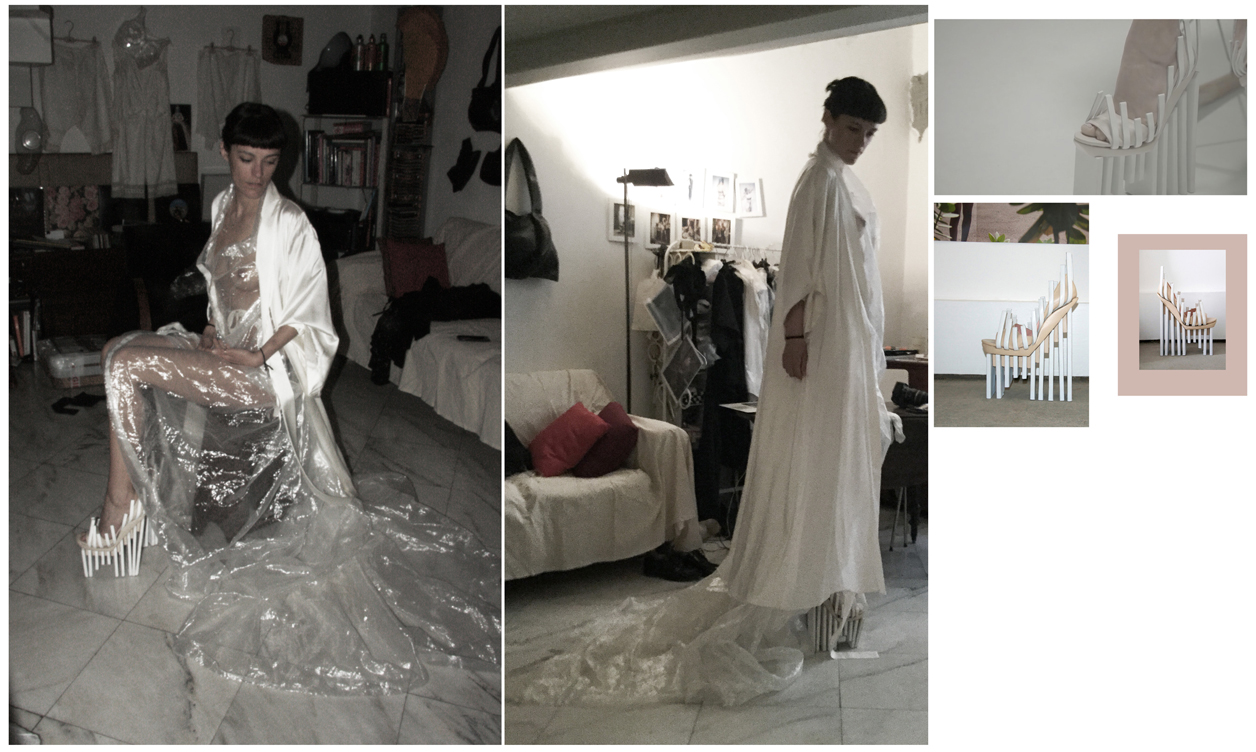 She walks on these platforms, made of several heels, portraying a real sense of vertigo.

(Stills from the movie)

The long straps of the white silk kimono sidle along the floor with levity, the alter ego is, in this part of the movie, stronger than the protagonist.

Wide shot of the room where we finally see her doppelganger sitting on a chair looking at the protagonist.

A: “Why don’t you go at the organ and you play something for me?” The movie continues into the church of the castle … 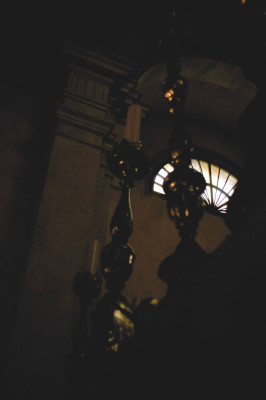 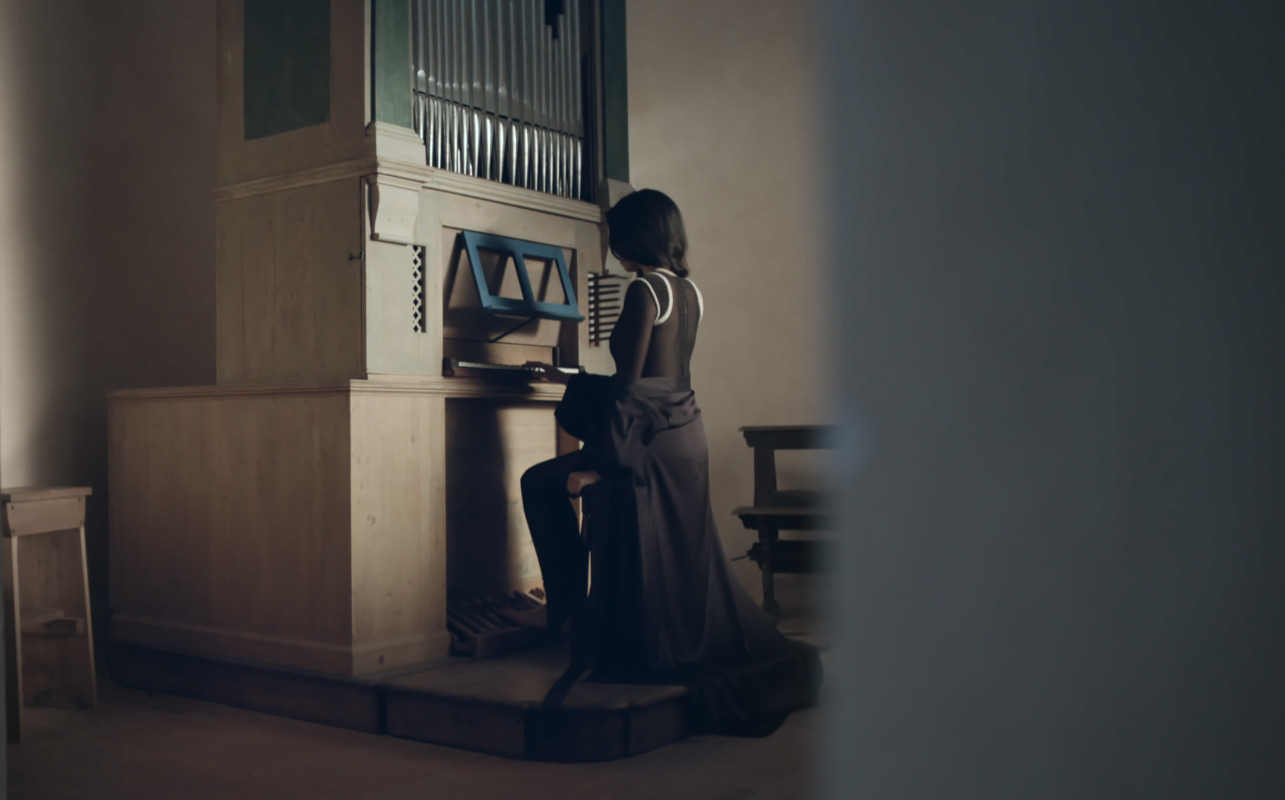 She is dressed with the same kimono of her antagonist but in black color.

More scenes and changes of styling and photography follow, this is just the teaser

The lenght of the full movie is about 5 minutes. Waiting for the official exit and for more pictures, I hope you enjoyed this article.

Then, if you are curious to know more about my role of stylist, I just add two comments to finish up:

I have another attitude that is considered a bit unusual for a designer, I am always pleased to discover new talents. For this movie I jumped on CAROLIN HOLZHUBER designs when she was at the beginning of her career, finding her profile on NOT JUST A LABEL. She is not only a talented designer but a person that is smart, humble and sweet. You can’t imagine how I was happy when, at the beginning of this year, I discovered she was proposed to design the shoes collection for Iris Van Herpen. She shown to the world that dreams can became real.

I am not a designer that thinks only to her drapes and if I can portray other designs in a special way I am really happy to do it, probably is for this innate ‘love’ skills, that I teach, hoping that my students can see my role not like a job but that they can perceive my unique desire to inspire them to push their dreams over.

A special thanks for carrying out the styling of this movie to my dear friend MARIA ABRAMENKO, the girl that you see in the studio, that helped me with the fitting without whom I couldn’t visualize my ideas, and to the directors YURI PIRONDI and INES VON BONHORST that called me to do the styling of this project and that have been opened to insert new scenes on their script when I shown them unusual ideas (I love to work with open mind people).

And to all the persons that participated in this adventure:

Giancarlo Morieri (DOP)
Music composed by Michael Picknett (the musician and composer)
Caterin Valdivieso @ 2Day Management (the model)
Rossano Fasano (MUA and hair)
Angelica Patti (the narrator)
Gaffer: Roberto Odorici (gaffer)
Carolin Nini Holzhuber (shoes)
Vittorio Ceccoli (Jewelry)
and last but not least the priest of the church and guardian of the castle that offered us a location that represents the mood of our main character.

A sneak preview from the fashion movie ‘Allegoria’ .. 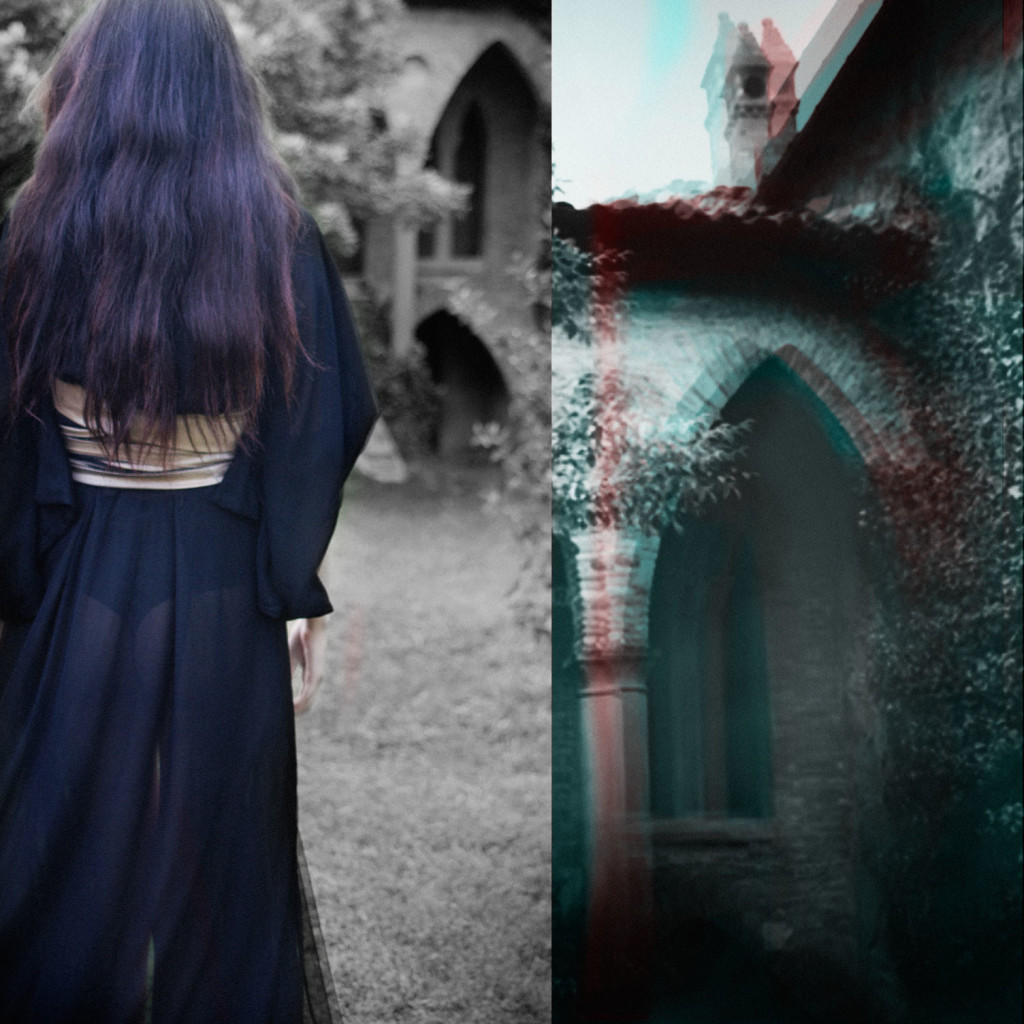 Last drop of summer .. looking back to the stage

Behind the scenes of Cosmopolitan editorial 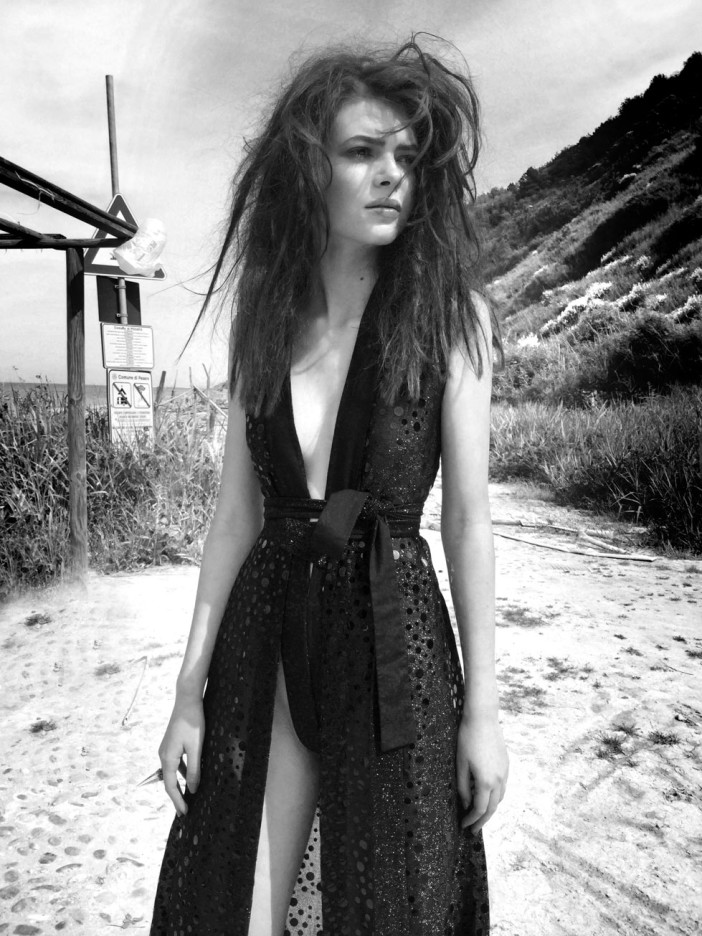 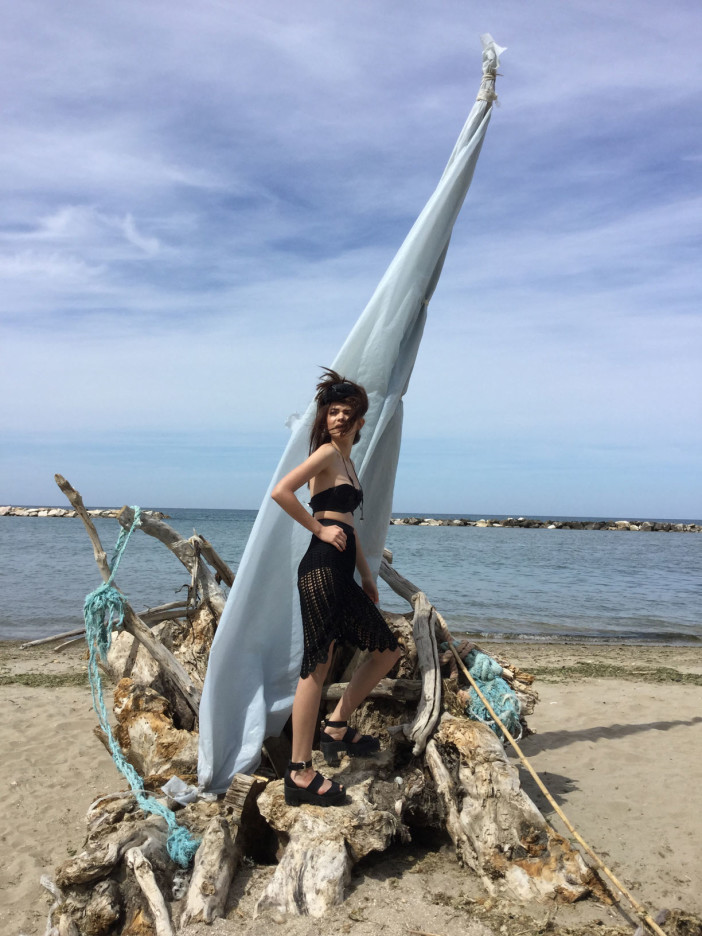 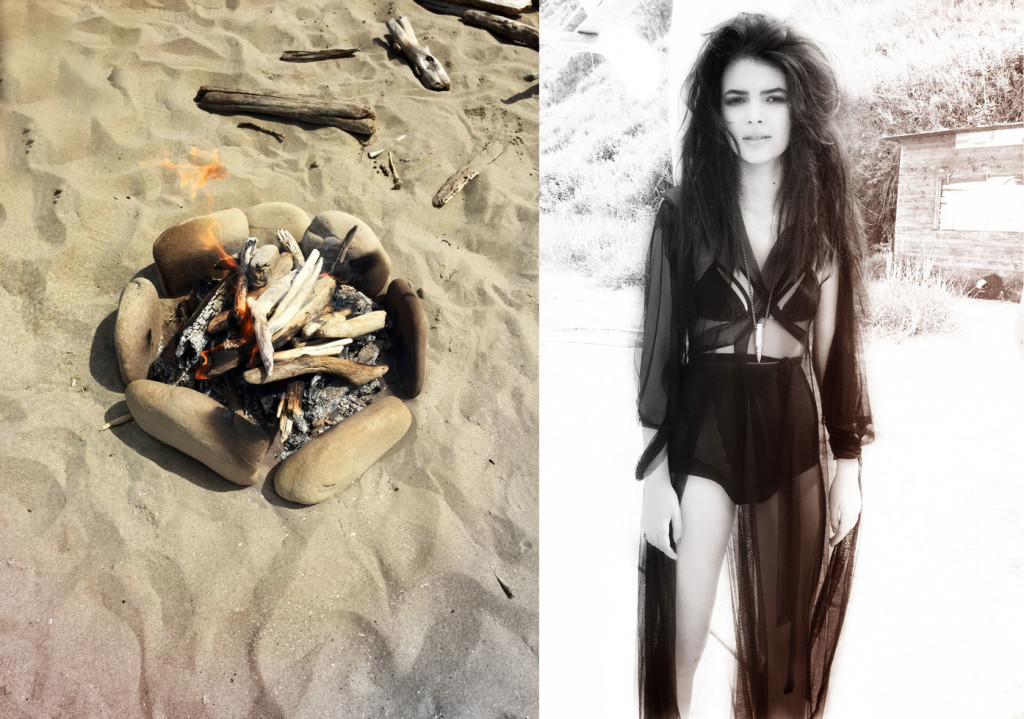 She was free in her wildness.. 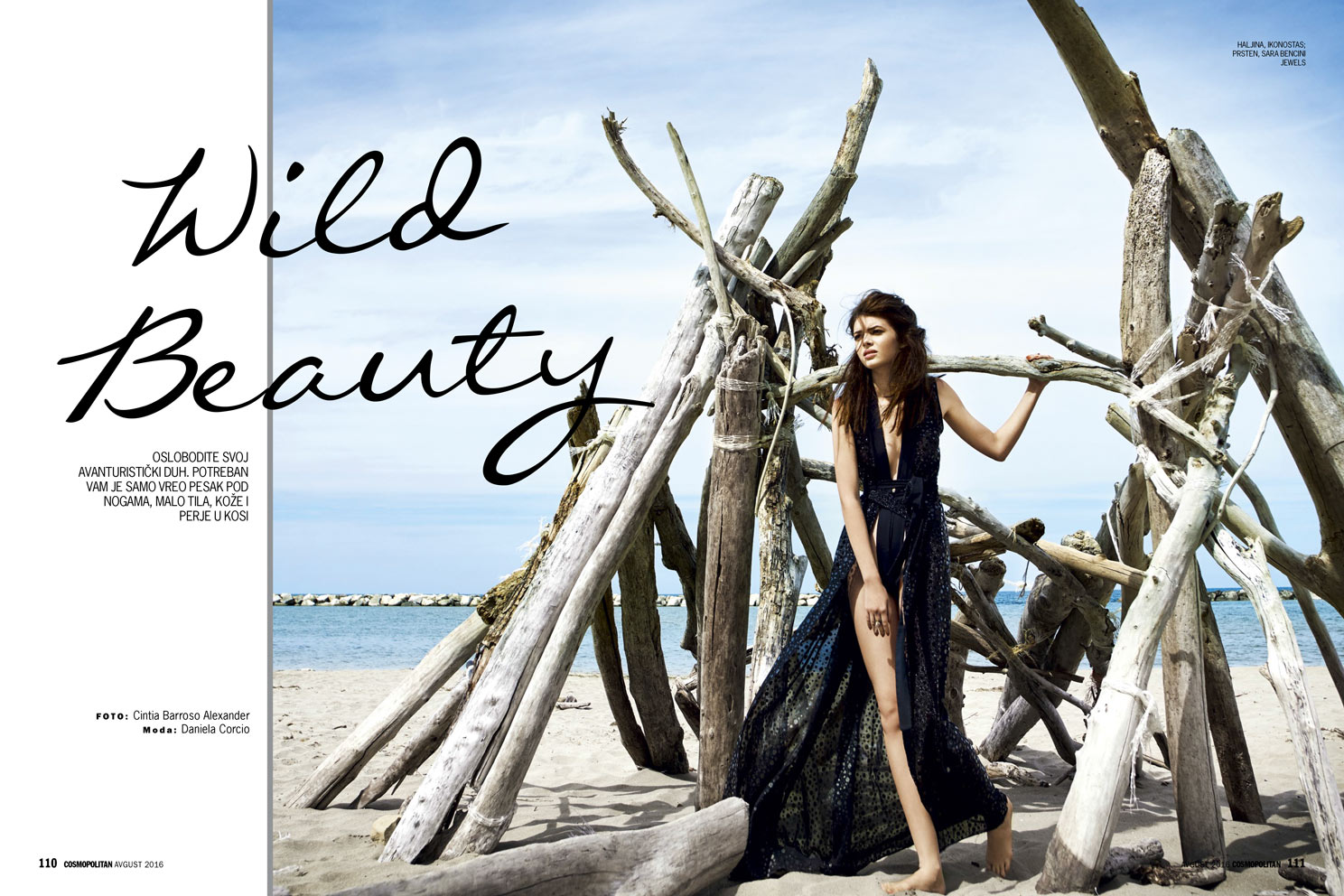 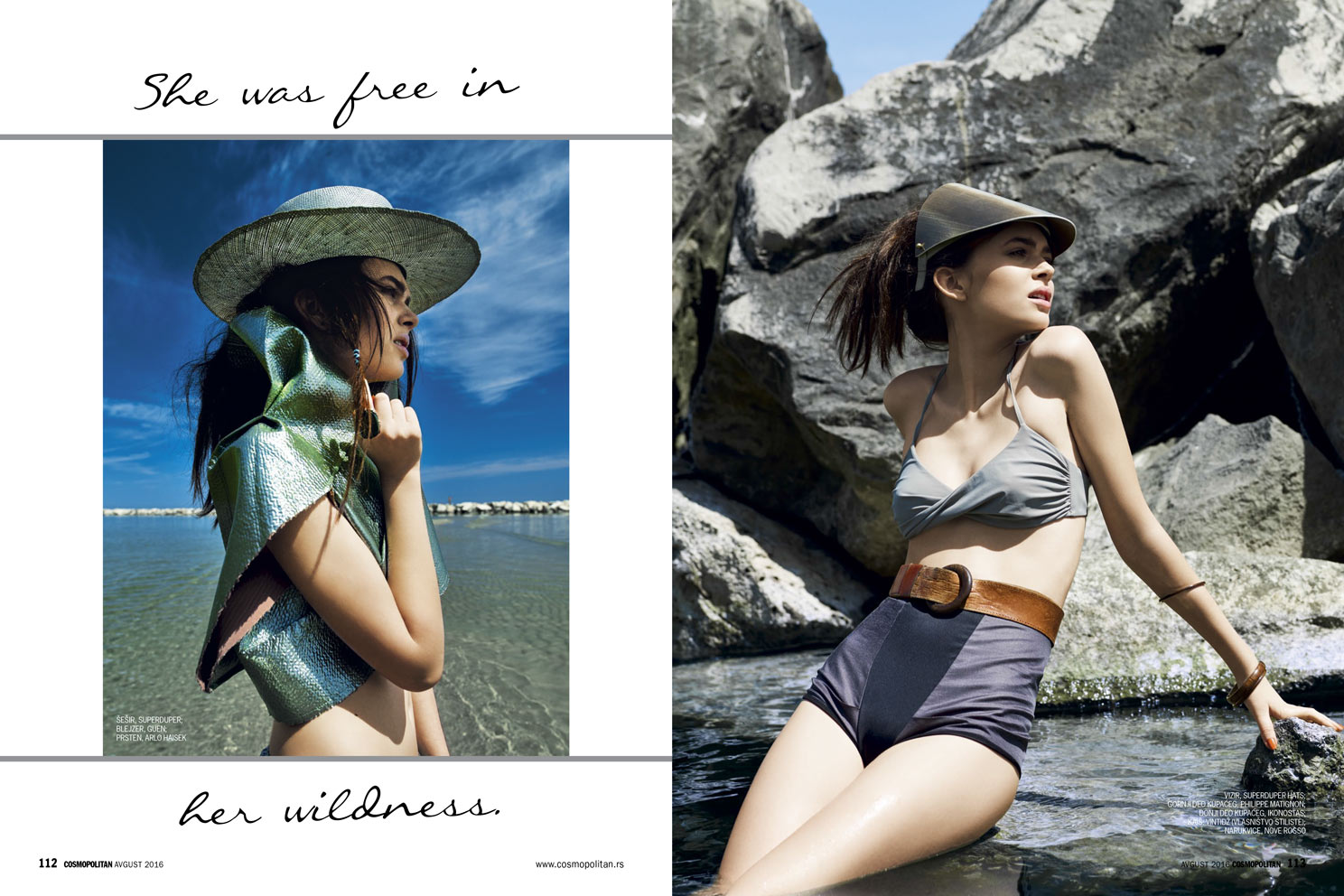 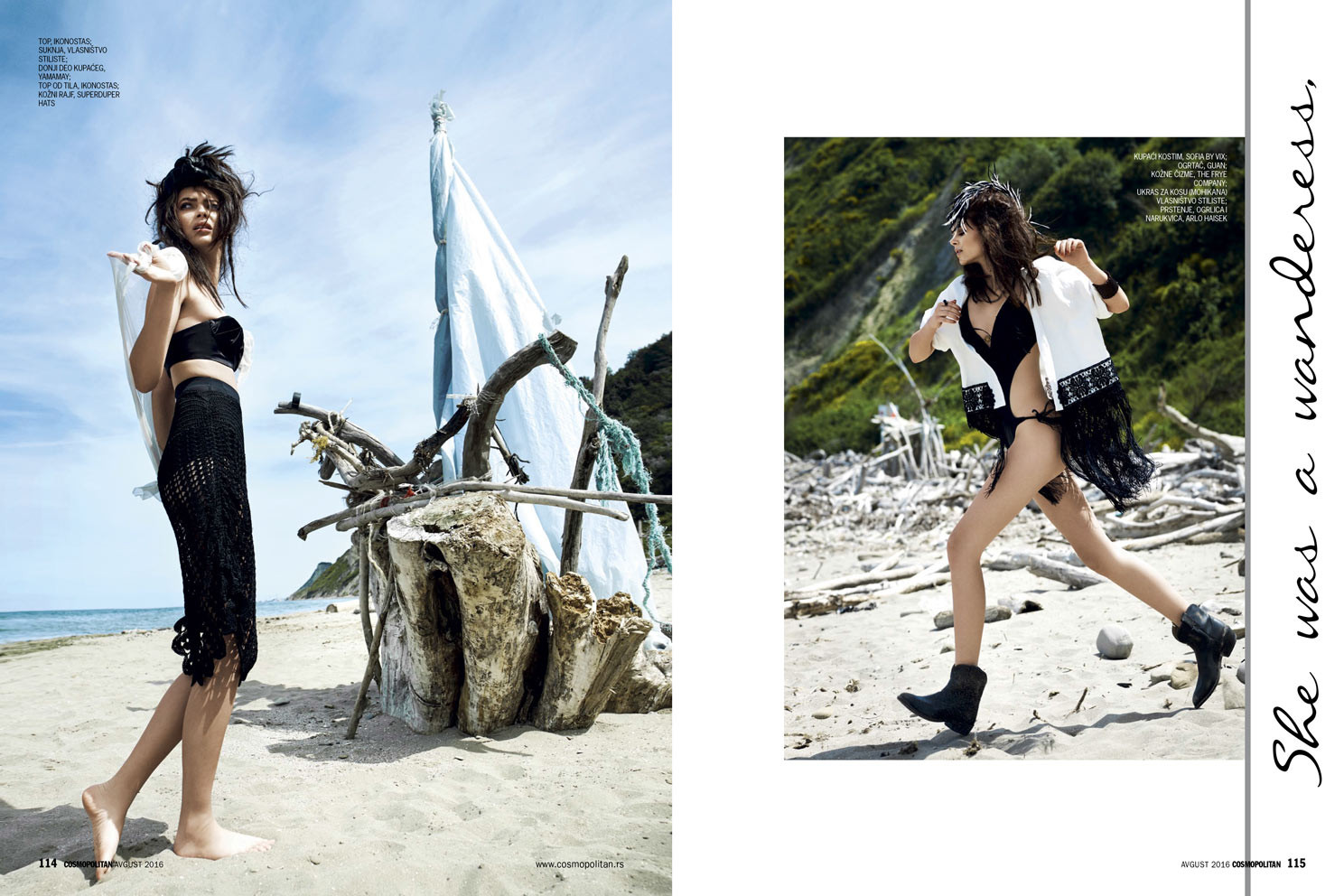 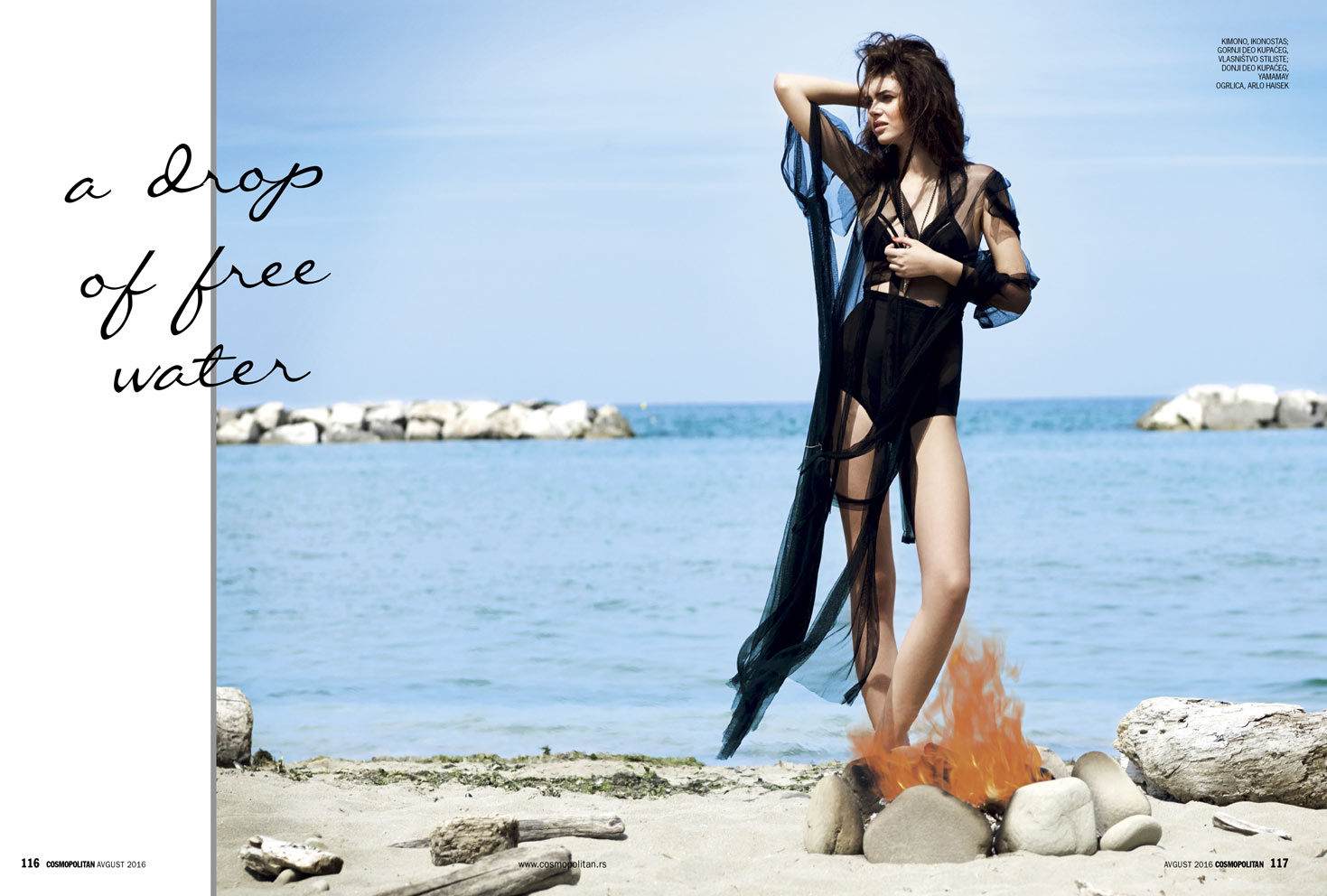 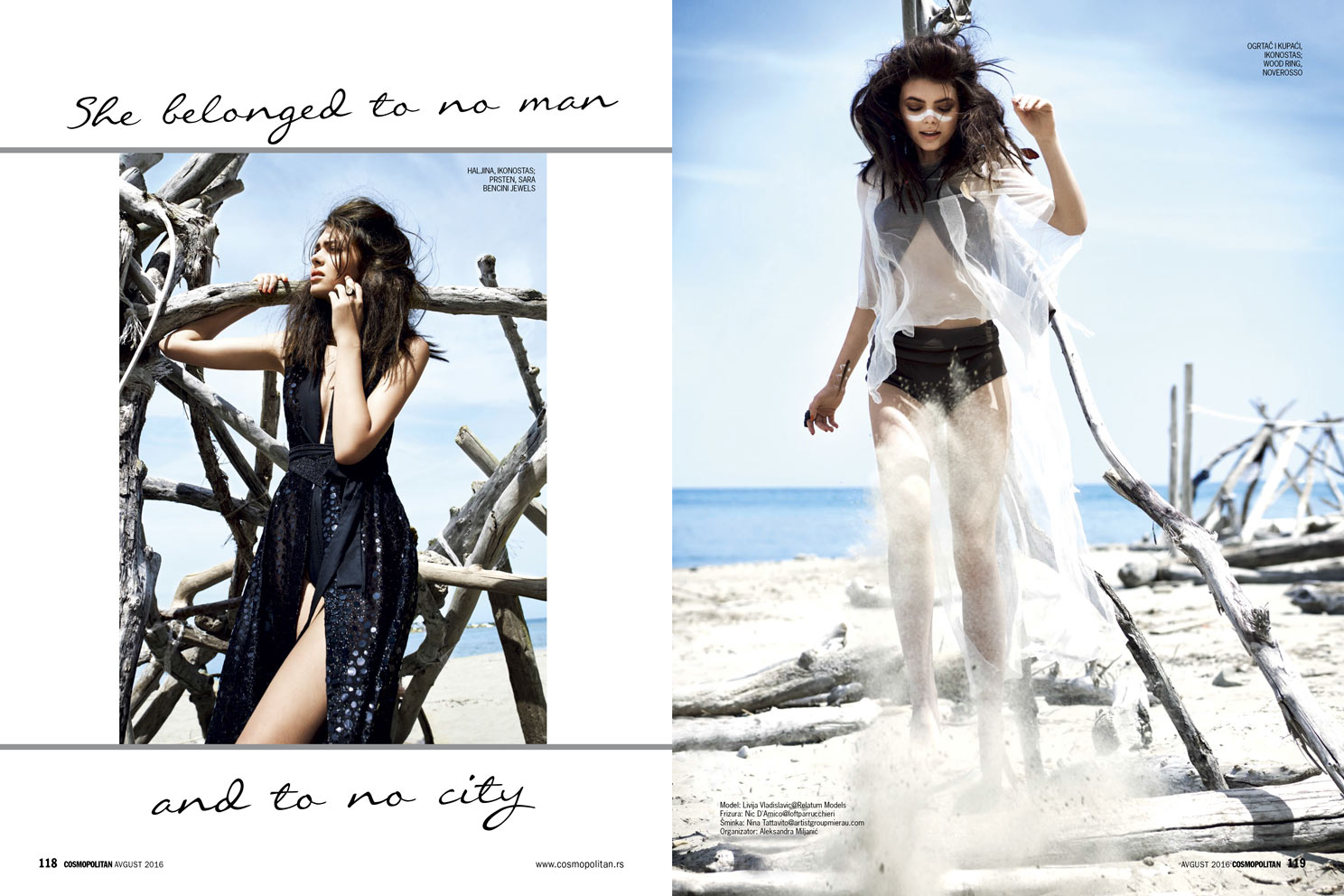 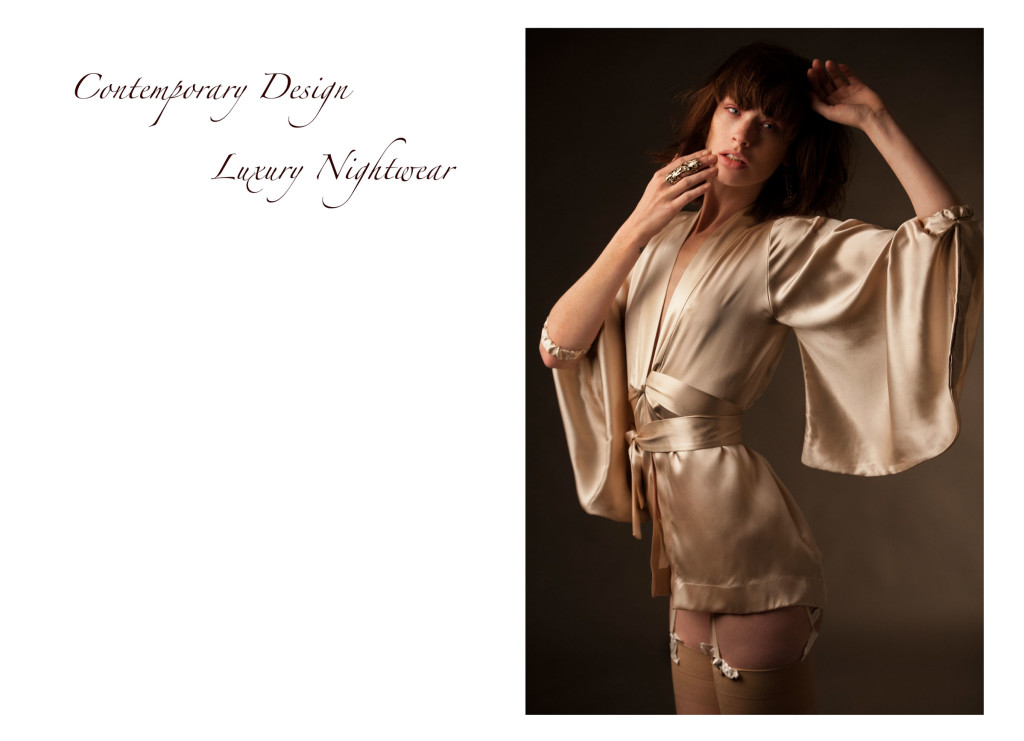